A campaign of industrial experiments and demonstrations is being conducted in the H2020 European Research and Innovation project AEROARMS funded by the European Commission.  In these demonstrations the aerial robotic manipulation methods and technologies developed in AEROARMS are being validated in the inspection and maintenance of industrial plants.

The AEROARMS consortium is composed by 10 partners (universities, research centers and companies) coordinated by Anibal Ollero, professor of the University of Seville. The project has already developed the first aerial manipulators in the world with one and two arms and integrated capabilities of perception and planning for industrial inspection and maintenance.

In May, June and July 2019 the experiments and demonstrations will be carried out in a refinery in northern Germany. These experiments will continue the previous successful testing in the same German refinery and in a cement factory in Spain performed by the University of Seville and the Centre for Advanced Aerospace Technologies (CATEC)

Particularly, the rolling end-effector of the AEROX manipulator, with an ultrasonic sensor, was used to obtain the wall thickness measurements of both pipes and tanks, which is very important to know the corrosion. 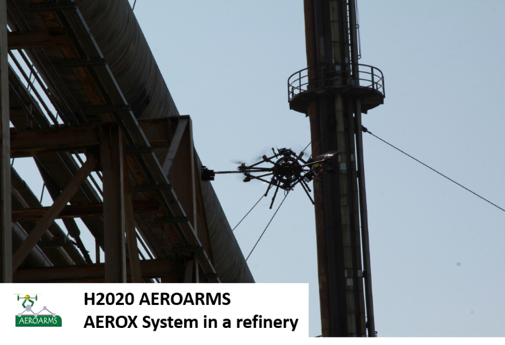 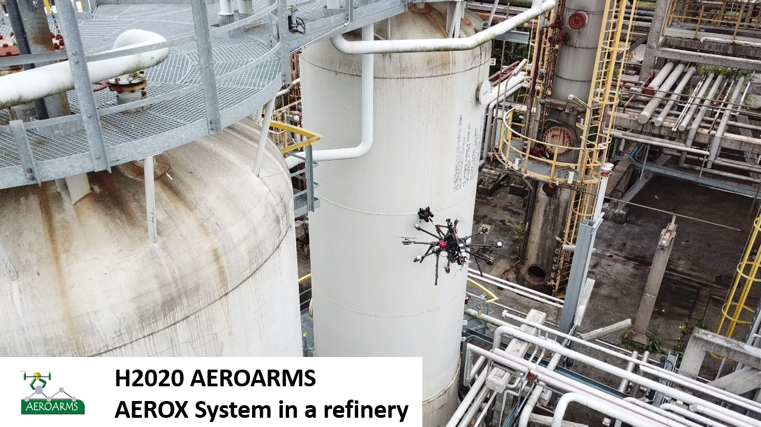 In the cement factory Lafarge-Holcim in Jerez (Spain), wall thickness measurements with the CATEC AEROX aerial manipulator equipped with an eddy current sensor from the Swiss company SENSIMA, also partner of AEROARMS,  were also performed. Moreover, the University of Seville demonstrated an aerial robot with two arms, mapping by using 3D Lidar and new techniques for position estimation without GPS. These methods were integrated in a Simultaneous Localization And Mapping (SLAM) method.  The SLAM was integrated with new trajectory planning, also developed by the University of Seville, in which the dynamic behaviour of the aerial manipulator is considered to compute optimal plans and to re-plan in real time when needed.

In May the multi-sensor localization and mapping techniques and new planning methods developed by the University of Seville will be experimented in the refinery in northern Germany.

Next June and July more experiments will be performed by other partners. The European Commission will attend the experiments in July and will conduct the final review of the project.

The AEROARMS project is also having a very important scientific and technological impact. Thus, the results of the project have received national and international recognitions and awards, such as the European Commission Overall Innovation Radar 2017 Prize in the Information and Communication Technologies,  obtained by AEROX, being selected the winner between 25 finalists.

The AEROARMS partners have published the results of the project in more than 110 scientific publications including the best robotic journals and presentations in the best robotics conferences.